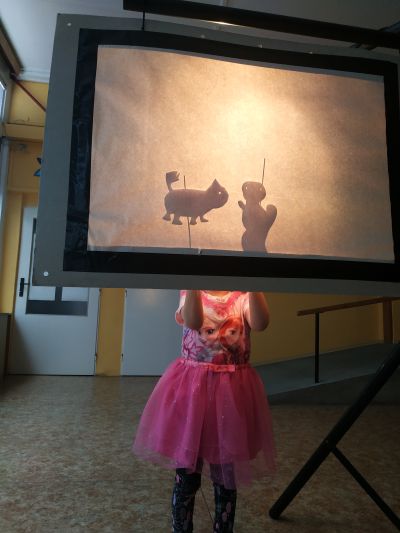 Creative workshop suitable for accompanying festivals, fairs and other celebrations. Day or night, outside or inside, school or public, children or adults. You will create a puppet from your fantasy and discover the magic of lights and shadows.

The workshop can be adapted to different conditions.

The shadow play workshop is suitable as an accompanying program, which means that it is possible to join it any time, the capacity is about 10-15 people at a time. The time of work depends on the interest of the participants, according to the complexity of the created puppet and the bias of creators.

In the case of the introduction of the program for schools, the capacity is about 30 children (one class).

is inspired by ancient oriental practices, when the shadow theater was played during the day – the audience watched the shadows created by the sunshine in a dark cave.

Similarly, in our solar Shadow Play, we are dependent on the sun as a source of light, and so we use a darkened tent instead of a cave. Everybody makes their own puppets from paper, colored plastic or natural materials according to their imagination – we do not provide any templates in belief that everyone creates the best shadow puppet according to their own ideas and abilities. Even the youngest children can make simple figures with the help of their parents, older children and adults can create ingenious and moving shapes both in color and black and white.

The condition of the solar is direct sunlight. Therefore it is advisable to ensure an interior darkened „alternative place“, in case the sun does not shine.

The shadow play workshop also has its night/dark variant, which can start outside after sunset or in a darkened room inside. A popular thematic variant is making of shadow nativity scenes held in the run-up to Christmas. During it, in addition to puppets, participants can also make their own theater stage and make other characters at home during Christmas.